Plan Projects was invited by Muse Developments to join their team as consultants to put together a Meanwhile Strategy to form part of their bid to build out the Royal Albert Docks site in East London in partnership with the landowner, the Greater London Authority/ London Development Agency.

Working with the wider team, Plan Projects put together a methodology and arrived at a series of viable project ideas designed to integrate with the long term vision for the site.

Meanwhile would therefore function not as early phase intervention to be swept away as the construction phase commenced, but rather as the first cell, or series of cells, in the building of a larger body as it grows towards maturity.

The Royal Albert Docks is a centre piece brownfield site in East London, and included within the Royal Docks Enterprise Zone. The area is a hive of regeneration activity, prompted by the rich infrastructure provision and the ripple effect of the Stratford Town Centre/Olympics development and associated legacy communities .

In addition to the Enterprize Zone, in May 2012 the Mayor of London established the Green Enterprise District stretching across large areas of the East of the city. The aim is to cultivate a natural competitive advantage within the Royal Docks in high-tech manufacturing, research and green enterprise.

In addition to the Docks themselves, the land uses in the immediate vicinity of the site include London City Airport, Beckton Park, the Docklands Campus of the University of East London and the established settlement of Beckton itself.

A key aspect of the viability of all Meanwhile projects is establishing a connection with the communities living and working close to the site. Meanwhile draws on the talents and enthusiasm of local people to create businesses, identify participants and build audiences for events and activities and, by so doing, breathe life into the area.

Our Meanwhile Strategy envisaged working with two key constituencies, the student community at the University of East London’s Docklands Campus and the residents and businesses in Beckton. In delivery, governance structures, such as a Community Development Trust or Community Interest company, would be established so as to facilitate community participation in the Meanwhile programme. 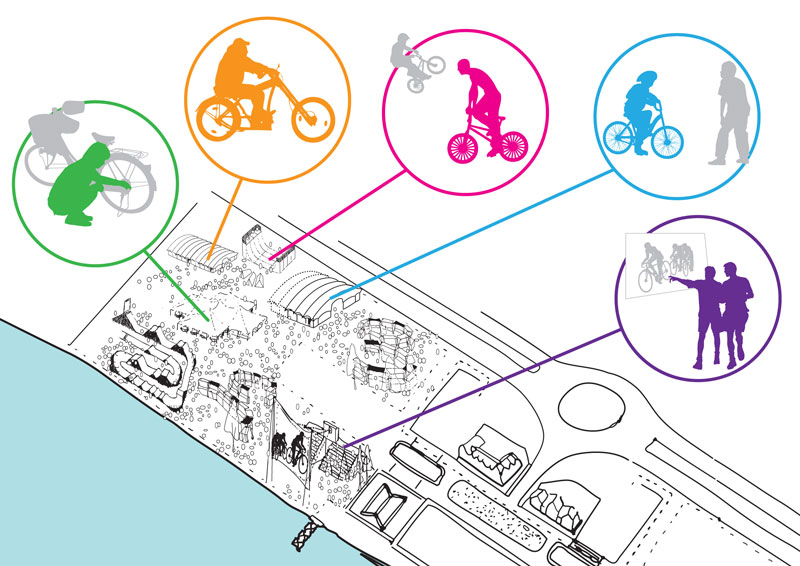 The vision takes as its starting point the masterplan’s proposed use zones: Technology, Education Village, Incubator Forest, Commercial and Leisure. These uses, together with the geometry of the masterplan, provide the Meanwhile Strategy with a framework and purpose. It will seek to sow seeds through the site that will develop into a thriving cluster of uses that will deliver economic and social value at both local and regional levels. Three specific ideas were put forward,

Each of these projects would then morph and develop, finding their natural place within the Royal Albert Docks’ emerging urban fabric.