In December 2010 Plan Projects formed a team to take part in a competition for Meanwhile uses at a three sites close to the Royal Docks in East London offered by Newham Council, Design for London and Property Week magazine.

Plan Projects put forward concepts for all three sites. One project, called ‘Honey Factory’ reached the finals of the competition and was subsequently featured as an example of best practice in the widely acclaimed book, The Temporary City by Peter Bishop, former head of Design for London, and Lesley Williams.

The project envisaged the delivery of a wild flower meadow at the centre of which would be an iconic structure providing multiple uses: a café, a learning centre and housing for a number of bee hives. The project also foresaw retained residential units converted for live/work use.

Canning Town is undergoing enormous change. Newham Council has formed partnerships with a group of private sector developers to build out a masterplan conceived in 2007. Part of this vision is a task of urban mending, knitting together the disparate elements of the Town Centre to generate a greater sense of coherence. The Honey Factory makes a contribution to this by creating linkages so as to form a natural extension for pedestrians and establish complementary uses with Rathbone Market and other key points in the area. 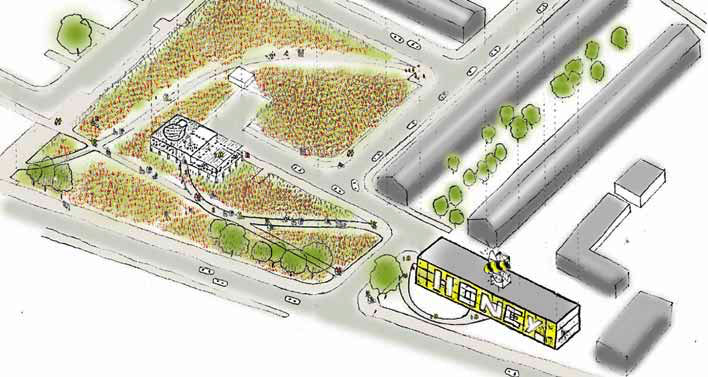 The installation of the ‘Honey Factory’ would introduce an organic, colourful and quirky use to aid the transformation of the Town Centre of Canning Town into a more people-centric environment. This physical presence would provide an adaptable environment in which project partners, the Golden Company and River of Flowers, would collaborate with the community in:
For more information or to discuss any of our projects, please contact us